The story of Khanyisa, the Baby Albino Elephant

The story of Khanyisa – “On Monday, January 6th , a female albino elephant calf, estimated to be four months old was found trapped in a horrific snare. Her wounds indicated she had been trying desperately to free herself for a few days, as they were deep and maggots had started eating into the open flesh. She had severe lacerations around the back of her ears and neck that stretched around her mouth, slicing into both her cheeks and into her mouth. There was no sign of her herd anywhere. We can not even imagine how painful it must have been for her, fysically and mentally.”

Arrival at the orphanage

When the little fighter arrived at the orphanage, she woke up to a beautiful sunrise. This inspired Adine Roode from the elephant orphanage HERD to name her “Sunshine” as her little soul just reflected such innocence and purity in the light of the morning sunshine. Afterwards she was given a traditional African name. As she belongs to Africa, her name is now “Khanyisa”, which means Sunshine/Light in a local language called Shona.

Since her arrival Khanyisa showed good signs of progression. The orphanage team from HERD is experienced and has done everything needed to help little her in her fight to get through this.

Her wounds needed a lot of ongoing treatment throughout the day. Also her fluid intake was crucial in this fase. Baby elephants are one of the most challenging animal species to hand-rear, and their condition can change within hours.

The team at Herd continually adjusted the milk formula in order to improve her drinking and according to her need. As she was not consuming the full amount in the beginning, the wildlife vet Dr. Ben Muller decided to do rectal fluid administration as it has proven to be successful with elephants rather than via a drip as it is less invasive and less stressful for her. This was needed considering her body weight as well as the dehydration of her body following her traumatic ordeal.

She currently takes twelve feedings a day, every 2 hours, and each milk formula is supplemented with medicines.

The snare that was wrapped around Khanyisa’s mouth and cheeks sliced deeply into her. As the maggots were eating the open flesh when she was alone in the wild, holes were created into her mouth. After the wounds were continually cleaned -in order to eridicate as much potential infection-, the wildlife vet stitched up little Khanyisa’s cheek and mouth wounds.

The days after the stitching, she did not drink well, probably due to the discomfort of the stitches. Since then her drinking has become easier each day.

Khanyisa had also deep lacerations behind her ears because of the snares she was caught in when she was found. The next step in her treatment was the stitching of these lacerations.

As she had lost part of her ear lobe and the veins were clotted from her injuries, sedation was very difficult. During the procedure the wildlife vet, Dr. Rogers, decided to stitch only the right ear, as it may be too uncomfortable for her doing both at the same time. Her ear injuries were positioned right in the crease where her ear flap. It was her right ear that was injured the most during her ordeal, as the top section of it had been sliced off too.

We are happy to tell you that Khanyisa’s ear stitching procedure was a success!

During the day, she also started drinking most of her milk bottle feedings. Unfortunately, she also had a bout of diarrhoea around midday which lasted a few hours. Adine adjusted some of her formulae, and then her stools were becoming solid again, though still a little less solid than usual.

Since then Adine successfully removed all the stitches, without much discomfort for the little calf. She was more sensitive behind her ears, but the wound was looking good and improving every day.

Khanyisa’s wounds have proven to be the greatest challenge for HERD rehabilitation thus far.

Therefore the team started a new stem cell treatment which has helped the wounds heal further as you can see from these photos shown in comparison to her injuries in January.

The stem cell treatment is a skin-restoring serum that combines plant-derived stem cells cultivated from Argan tree and Comfrey roots, which help to regenerate dry and damaged skin. With a natural extract from the aerial part of Onopordum Acanthium, they help to increase skin turnover.

For now, Khanyisa is doing very well. She loves water and likes to play and run a lot. She also gets a lot of comfort from dense vegetation. When she first arrived, and she had the opportunity to venture, she headed straight for long and thick grass and bushes. The reason for this, perhaps, could be that it was the only protection she had when stranded all alone and trapped in the snare. Maybe it gave her a feeling of comfort when she was scared of all the potential dangers that surrounded her.

“There is something so peaceful about little Khanyisa. She is full of grace and love. She feels pure. There is no other way to describe.”

As she is doing so good at this moment, the introduction of Khanyisa to the Jabulani herd has already been started. This is a slow introduction as the carers at HERD need to monitor both Khanyisa and the elephant herd to ensure they are not stressed out or overwhelmed. You can read all about this introduction fase in our next post. 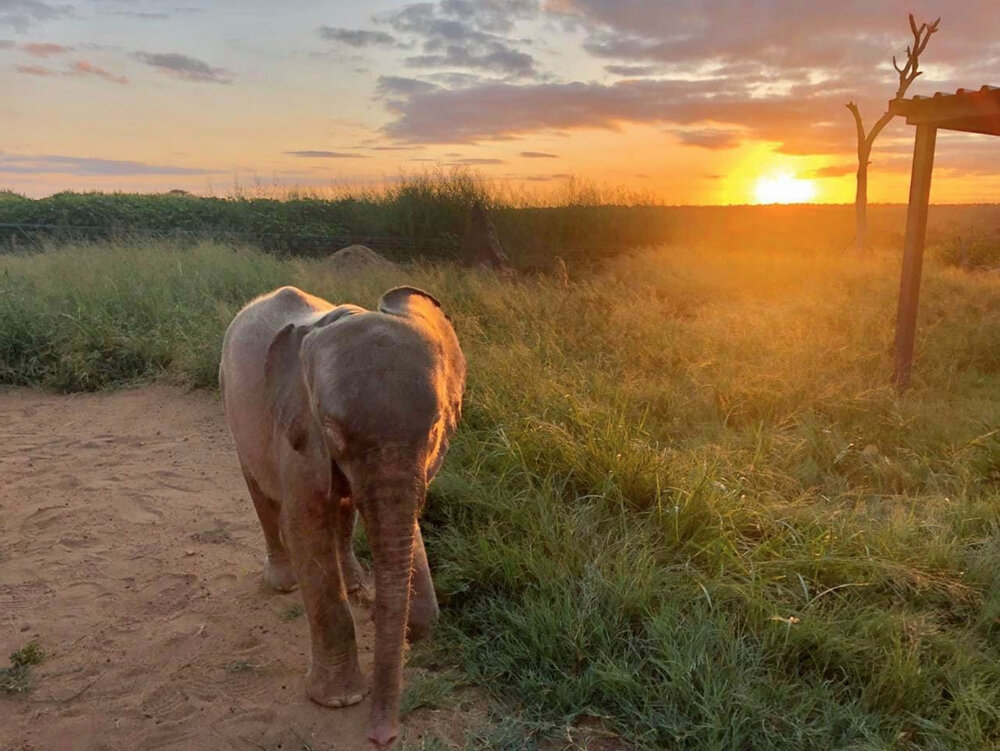 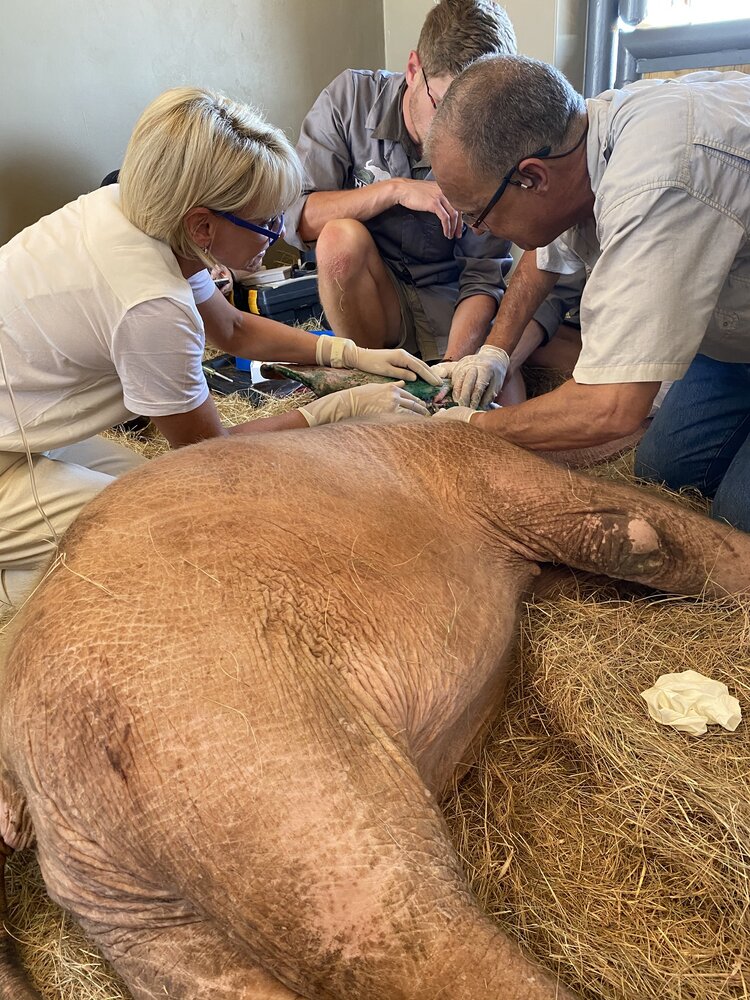 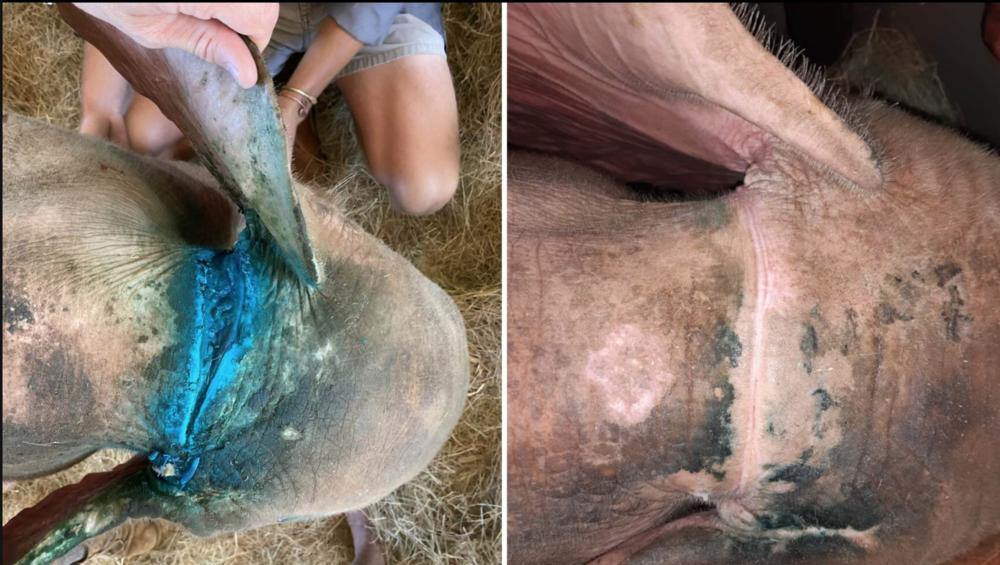 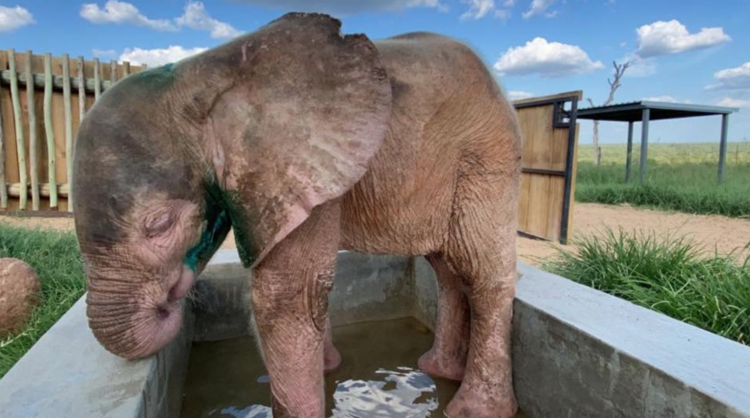 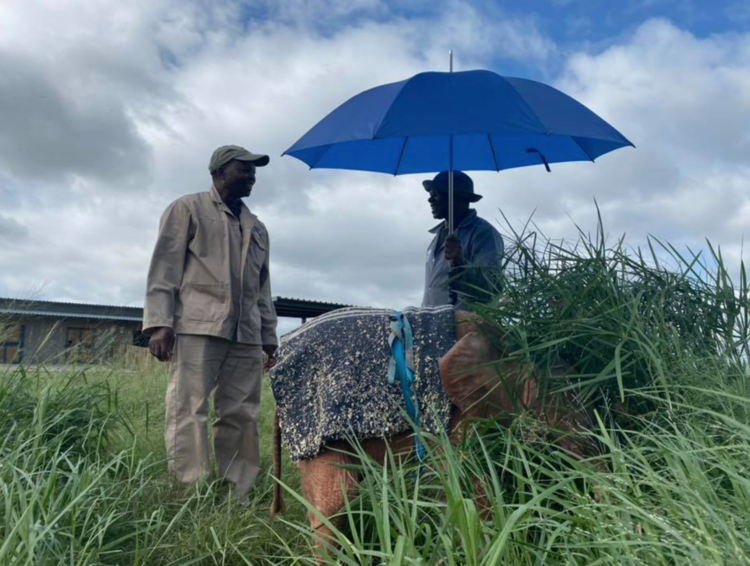 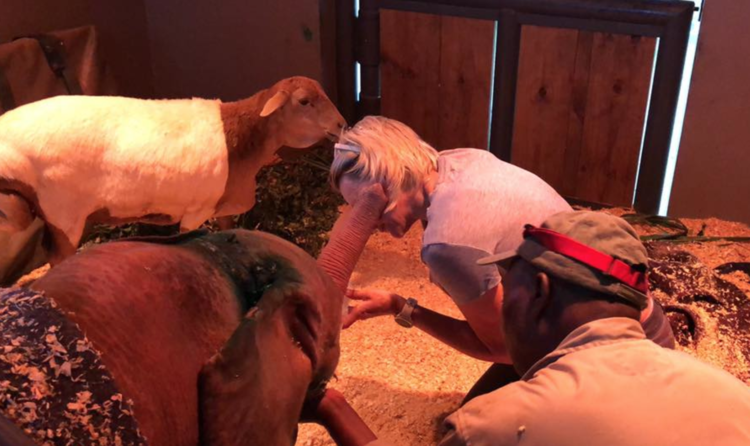